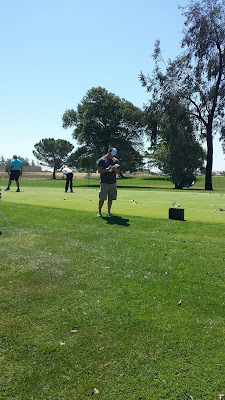 Rick and Michelle made a monetary donation to this event while volunteering their time.  Rick was in charge of the Putting Contest and Michelle assisted with check-in. 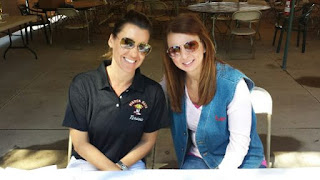 Vacaville residents seem to get in the mood for pageants and festivals once spring rolls around. For the past 101 years, they have turned out for many different spring and summer celebrations. Vacaville Pageant Day on April 30, 1916 was a grand production, “a poetic idea successfully carried out by the united efforts of the community,” noted The Reporter in its edition of May 5, 1916.

Main Street was draped with flags and 1,500 lined the street to watch the parade of 300 pageant participants pass from High School Hill down to Main. The pageant depicted the history of California and Vacaville. 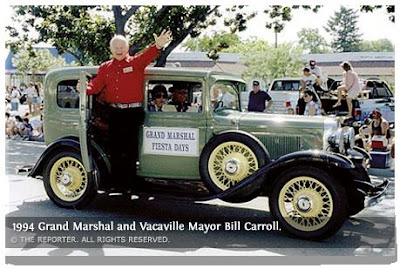 Chief Solano led the parade followed by American Indians native to the Vacaville area. Next followed the Spanish with descendants of the city’s founding families, the Vaca’s and the Pena’s. A chorus sang “La Paloma.” Next came the Fansciscan fathers, the gold rush miners, cowboys, farmers, the Japanese and Chinese, Gypsies and singing schoolchildren. Bringing up the rear were decorated automobiles – still a new sight in 1916.

Wells Fargo Co. lent an old ’49er stagecoach, just as it does now in the Fiesta Days Parade.

Next Year…
But when spring rolled around the next year, there was no Vacaville Pageant Day II. Not a word about it in the local paper. Although the newspaper would print about Dixon and their May Fair and the Solano County Fair. Vacaville wanted it’s own fair.

So what did we do?
We created Fiesta Days in July 1957. We called it Western Fiesta, the week was more akin to a cowboy roundup and rodeo. There was plenty of square dancing and the rodeo ran for two days. Everybody seemed to be involved. Most of our events were started that year: Parade, Queen Contest and the Jail and Beard-growing Contest. The parade was on Saturday. It’s route began at West and Merchant streets, heading up to Main street and turning west to Buck Avenue. The parade was run by the Fire Department.

A big barbecue was held in Andrew’s Park. It was on Sunday that the first Whiskerino Contest was held. It seems that all the men in town were challenged to grow a beard. A jail was set up to incarcerate any man who hadn’t grown a beard. Even the town’s distinguished Judge S.M. Dobbins was made a “jailbird.”

The City Council members dressed up in long black coats with top hats and Lincoln-style beards for their meeting during Fiesta week. All five men took part in the parade in costume and riding donkeys. Western Fiesta became Fiesta Days and the community’s Spanish and Mexican heritage has been given more attention over the years. Events changed and committee members disagreed, battled, quit and rejoined, but somehow, Fiesta Days has endured for 50 years.