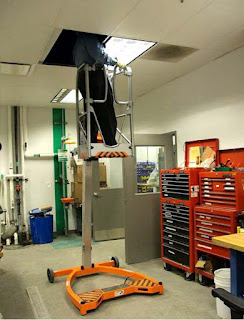 Employees at a large nuclear power plant in the eastern United States spend a lot of time working on the more than 100,000 hand-operated valves which control the flow of water and air in and out of equipment throughout the plant. When something needs to be serviced, the valves need to be turned off to isolate the equipment; however, each valve is over 10 feet in the air. Because opening, closing and performing maintenance on these valves requires the use of two hands, a crew set up scaffolding every time. Though safer than using ladders, this process was costing the company time, money and manpower. As a result, the company set up a “scaffold reduction task force,” to identify alternative solutions to this costly standby work platform.

A Perfect Solution
Separate from the task force, one of the company’s mechanics also noticed how much time was being wasted using the scaffolding. “It took four to six hours and a whole crew of people to set up the scaffolding,” said the mechanic. “And because we work in a nuclear plant, any structure that was intended to stay in place for more than a few hours required a seismic inspection to ensure it could withstand tremors from an earthquake before we were allowed to use it.”

All told, scaffolding set-up and teardown could take up to nine hours, not including the time it took to get an inspector to approve the structure. “I took it upon myself to find an alternative that would save everybody time and money,” said the mechanic. “And then I found it – JLG’s LiftPod®, a tool that I knew would be our perfect solution.”

Now, instead of needing a whole crew to set up the scaffold, the people who are working on the valves can carry the LiftPod out to the site and set it up in 30 seconds, rather than six hours. Because the valves are located in limited access areas, with very little space available and several tight corners to maneuver around, the maintenance staff could never have used even a 10-foot ladder.

In addition, since the LiftPod is only in place for the five minutes it takes to turn the valve on or off, the company also is saving the time previously spent on the scaffolding inspections. “The LiftPod works so well on the valve maintenance that we’ve started using it for other projects around the plant,” said the mechanic. “The electrical team is using it to replace light bulbs and ballasts, and the instrument and controls group is using it to perform maintenance on air valves.”

Doing More With Less
Overall, maintenance staff at the company is saving up to nine hours per valve adjustment by using the LiftPod. They are also saving money. In this economy, it’s all about doing more with less. “The LiftPod helps us do exactly that,” said the mechanic.

Find out more at:  www.jlg.com